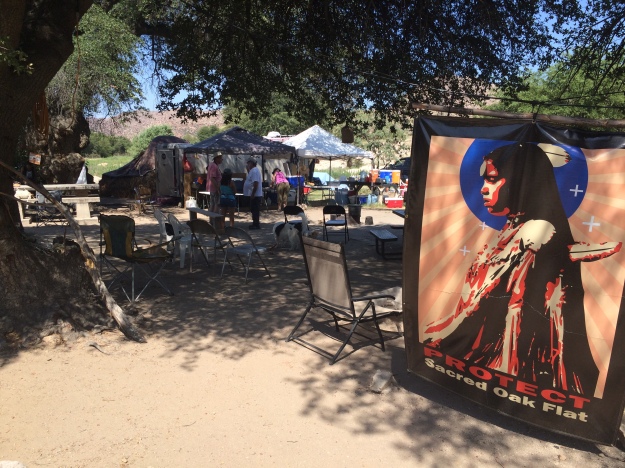 Photo taken on August 23rd by Cirien Saadeh at the Apache Stronghold on Oak Flat. Apache leaders have been occupying Oak Flat for months in protest of the congressional sale of Oak Flat to Resolution Copper.

Leaders of the San Carlos Apache Tribe are occupying the Oak Flat campground in Superior, AZ as they protest a congressional decision to sell the land to mining company Resolution Copper. The site is also an important riparian area in Arizona.

“The environmental and economic issues should matter to everyone, because they affect all of us,” Roy Chavez, Mayor of Superior, AZ and former miner, says.

Resolution Copper has been attempting to purchase Oak Flat from the US government for over 15 years, though annual attempts to purchase the land have failed. That is, until this past year’s National Defense Authorization Act. The Oak Flat land-exchange rider, authored by Senator John McCain, is one of approximately 90 land riders in the NDAA.

H.R. 2811 has been authored by Representative Grijalva (D-A Z3) to repeal the Oak Flat land rider from the 2015 National Defense Authorization Act. The bill reads, “[Resolution Copper] plans to hold the Forest land privately for a mining company that will result in the physical destruction of tribal sacred areas…” and goes on to the say, “the mining project will also create significant negative environmental impacts by destroying the area and depleting and contaminating precious water resources.”

Oak Flat is just outside of the Apache San Carlos Reservation (though it formerly belonged to the reservation until illegal mining forced congressional sale of a huge chunk of reservation land to a mining company in the early 20th century). The sale of Oak Flat would be hugely environmentally, economically, and socially detrimental, according to Prescott College organizers on a Save Oak Flat campaign.

“We’re taking away the possibility of there being an intact, functioning ecosystem,” Mackenzie Macner, lead organizer on the Save Oak Flat campaign, says.

Resolution Copper, however, argues that the mine will provide much-needed jobs to the Superior area. “As you discuss social justice, remember unemployment on the San Carlos reservation is around 70% and in the copper corridor it is over 10%. Most of the people I have spoken with would like work to help provide for their families,” Dave Richins says. Richins is Resolution Copper’s Principal Advisor on Government Affairs.

According to a report prepared for Resolution Copper, the mine’s economic impact on the State of Arizona would be over $61.4 billion. The same report notes that the mine would employ approximately 1,400 individuals during peak mining periods. It does not note where those individuals would be employed from.

A counter-report from the San Carlos Apache Tribe argues that Resolution Copper is exaggerating the expected benefits of the mine. Further, the counter-report argues that the original report fails to report on the actuality of copper mining in Arizona, the negative impact the mine would have on long-term unemployment in communities like Superior, AZ, and the significant environmental harm that would be caused by the proposed mine.

“The Pollack Report was written to get the mine permission to give the numbers to the politicians so they could go there and wave them over their head and say, we gotta have this mine, look at all this money we’re going to make…The Powers Report completely debunked it, it said it couldn’t even really be considered an economic analysis because it was so absurdly glib,” Macner says.

Resolution Copper is planning on conducting “block cave mining,” a type of mining which would essentially collapse Oak Flat and surrounding areas in. The company plans on using water from the Colorado River for their mining and then treating the water which would then be used for agriculture in the Phoenix area, since it would not be considered safe for drinking water.

“Resolution Copper would have to secure the rights to 67% of the water coming from the Colorado River to supply this mine,” Tao Etpison, Vice Chairman of the Tribal Council of the San Carlos Reservation, says.

Environmental organizers from across the country have organized to save Oak Flat. In August, Sally Noedel and daughter Emma Bigongiari arrived from Oak Flat after leaving Washington State in May for a three-month walk. Their goal was to support Apache leaders attempting to save Oak Flat.

On their website, they say “We walked 1000 miles from Bainbridge Island, Washington to Oak Flat, Arizona to spread the word about a piece of National Forest land the government has given to a foreign mining company. Whether you’re an advocate for the environment, religious freedom, or protecting public lands, there are so many reasons to join us in opposing this mine.”